This year is Canada’s 150th anniversary, so there are more reasons than ever to visit our Atlantic cousin. This means year long parties and you can expect free admission at more than 200 national parks, museums and historic sites across the country. It is probably the friendliest nation ever and about to get a whole lot more easy going as there are plans for Canada to become the first G7 country to legalise Marijuana…(opens visa application).

Being the second largest country in the world and spanning 6 time zones, it was impossible to curate a list rather than a dissertation, but here are some personal faves:

Montreal is also celebrating its 375th birthday this year so is set to be buzzing with events such as Cite Memoire, Igloofest and Illuminart to showcase its innovative and artistic flair. The Quartier des Spectacles is the home of art, film, music and comedy so it may be worth checking out the events schedule before booking so you get the most out of your visit. If art is your thing, the Montreal Museum of Fine Art will also be hosting a public art walk from June-October; the exhibit will span 1kmand present 67 works from Canadian and International artists representing values of openness, tolerance and humanity. The gallery itself will also have some exceptional exhibitions throughout 2017, particularly Leila Alaoui’s ‘No Pasara’ so be sure to drop in and see what’s on. If you are travelling in the summer try to catch the First Nation’s Festival between August 3-10, celebrating Canada’s aboriginal roots with film screenings, seminars, art exhibitions, concerts, and parades. If you work up an appetite from all that culture and are craving a real taste of the Canadian outdoors head to Manitoba for some of the best locally sourced ingredients and inventive dishes I have ever seen. Or if you just want a comforting break after strolling the streets of Old Montreal, Julliette & Chocolat offer the smoothest, velvetiest hot chocolate around; the Nutella Overdose will leave you in a heavenly cocoa coma. Finally, don’t skip the Notre Dame Basilica, the Biosphere and Botanical Gardens.

Apologies to my Torontarians and despite everything I just said about Montreal, my favourite city of the bunch has to be Vancouver. Perfectly nestled between the brooding mountains and glistening ocean, it’s one of the only places you could hit the beach and the ski slopes in the same day. It’s also the most ethnically diverse of Canadian cities, which can only mean one thing… foodie heaven! The Richmond night market and Granville Island public market offer some great street food, but the best finds will be hidden in the cobbled labyrinth of Gastown, AKA the Shoreditch of Vancouver. Aside from stuffing your face at every chance, my top tip for Vancouver would be to walk along the Capilano suspension bridge; the world’s longest and highest suspension bridge that hangs over the Capilano Canyon. If you bring an extra pair of underwear you can also try the glass-bottom cliff walkway or the less terrifying tree0-top adventure through the canopy; all of which is illuminated in thousands of glittering lights during Cayon Lights in the winter. During the festive period you can also go on a Snowy Owl Prowl and see the world’s tallest living Christmas tree towering at 153 feet high!

However, as much as I’m a city girl, my top pick for Canadian destinations has to be Banff, more specifically Banff National Park with its rugged peaks, valleys, and turquoise-blue lakes. You can hike the Rocky Mountains, explore the Valley of the Ten Peaks, take a canoe out onto Lake Louise, ride horseback through the rugged terrain or just soak in the scenery at a hot spring. I would do all the above, but, if you do nothing else, make sure track down Moraine Lake for the most breathtaking views of this glacial lake nestled within the Rocky Mountains. The lake is glacially fed and when its full (around late June) it becomes a distinct shade of blue (as light is refracted off the rock flour on the lake’s floor) and the snow capped peaks are perfectly framed in its mirror like surface; a photographer’s paradise. If you are thinking of going in the winter month’s but still want some praise worthy photos, you might be lucky enough to see the wondrous phenomenon of frozen methane bubbles in the lakes. 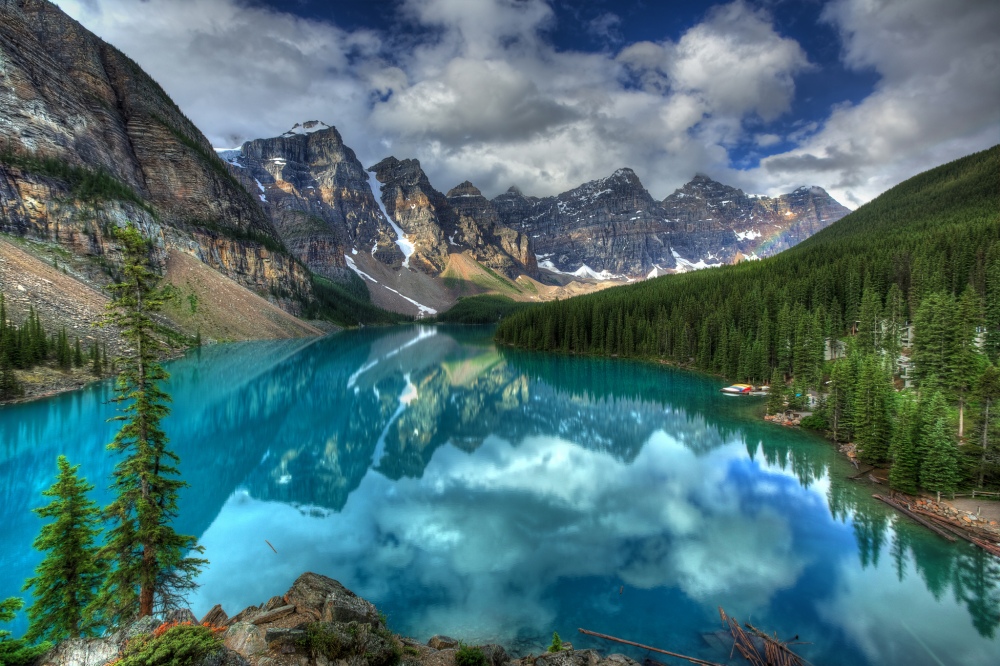 Photo of Moraine Lake in the summer (Copyright: edwademd)

Whilst in the Northern Rockies you should also see if you can make the trip to Mount Nimbus via Ferrata, located just west of Banff. It reaches an altitude of 8,698 feet high, and its peak is only accessible by way of a 1.6-mile steel cable suspension bridge. So if dizzying heights are your thing and sky-walking is on your bucket list, this is for you. But no matter how terrified you are, don’t close your eyes, because these are some of the most unbelievable views! 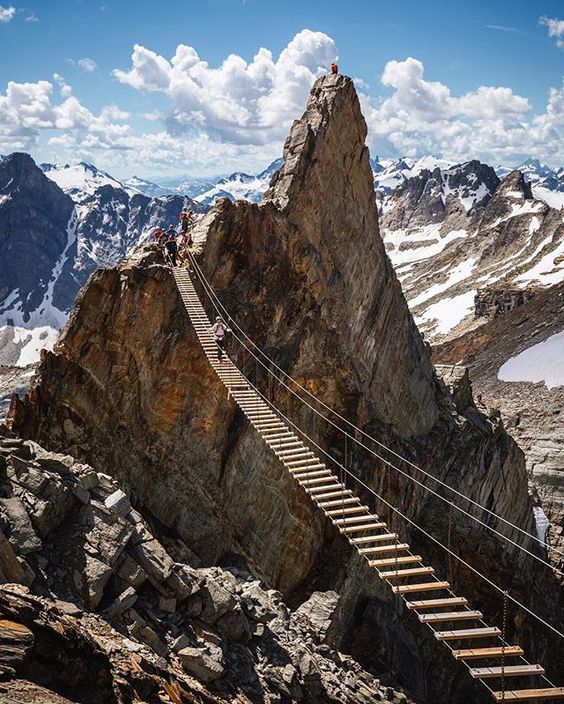 Oh and how could I forget Niagara Falls! Located in Ontario and straddling the Canada/US border, this is probably the most visited sight in the country. Plus, the perk of being on the Canadian side is that you get the chance to experience the thunderous water crashing down around you from behind the falls!